Frayz’s Inferno orange 182 - Back in the old flame

Im not going to lie, it feels like its been a slog. A job i really wanted to do but so glad i broke it down into segments. To do properly just takes so much time and you can easily get carried away just rushing it as its pretty laborious.
The boot and back end took me a week of evenings, the doors were a morning each and the interior cabin was a solid day. So you would need a good few days spare to do it. Of course im using my car in between time, so if you were to strip the car fully and run through the job, start to finish it would be quicker. I also was upgrading audio at the same time, routing cables, speakers etc.

Sound wise inside now, its odd as its still very much a Clio, but the doors sound different when they shut, as does the boot. The sound of the central locking has a deeper tone to it and it feels generally tighter and a bit more premium. All of the Clio'ness is still there and there's no doubting what car you're still in. Blindfolded you wouldn't all of a sudden think you're in a modern car for example. But all of the hums, rattles and buzzes that stiff Clio makes is significantly reduced.
Road noise is down massively and everything going on is more muffled and less aggressive. Yet there's still all the snap, crackle and pop from the ITG Maxogen and PMS de-catted system. Its still all there, just a bit smoother if that makes sense.

I had previously been testing the ambient noise inside the car with an iPhone app, but since my last test, i have swapped over to my summer tyres which as anyone who has used R888Rs will know, they're bloody noisy. So any results i got this morning were purely for fun to see how much improvement had been made.

Now i know the results are flawed, but as said before, i didn't need an iPhone app to tell me how much better it has made the car. A total drop of over 10dB and that's with noisy rubber on too, its made a noticeable difference to how nice the car is to be in day to day. However one issue is my previously vary quiet PMS shifter is now the loudest thing in the car and i will be forced to revisit shutting it up if i can.

All in its cost me about £140 for the sound deadening materials used and including the audio i have added approx. just under 20kg to the car.

Previous results and this mornings results posted below

Actually, I've just checked regarding weights.
Deadening was 8kg Dodo Hex, 3.5kg Noico 2mm, 2kg of Super liner. So less audio, if anyone wanted to do the same without audio its approx 13.5kg to do the whole car. I had a tiny bit left over but for weight purposes is negligible. 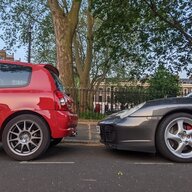 amazing! I had thought about this the other day as I only take the Trophy out on long drives and when sitting at 72/73mph the RPM creeps up to around 3400rpm which can get a little annoying after a while. I've got a yozzasport on my car so have thought about putting some deadening under the rear seat and boot floor to quieten it down even a smidge. You've definitely given me some ideas.

where.is.lee said:
amazing! I had thought about this the other day as I only take the Trophy out on long drives and when sitting at 72/73mph the RPM creeps up to around 3400rpm which can get a little annoying after a while. I've got a yozzasport on my car so have thought about putting some deadening under the rear seat and boot floor to quieten it down even a smidge. You've definitely given me some ideas.
Click to expand...

You’ll be amazed if you was to just do the boot, tailgate and rear bench at how much better it will be.

New mats and filter service on the Maxogen. Takes bloody ages to flush out all the old oil, even with the correct ITG cleaning solution, but worth it when you see the junk one of these collects in 20k of road miles. Should be good for a further 20k now.

Not much to report, still doing its thing.

ECU cover/holder swapped out to one in fresh gloss black.

Thanks mate, not too sad for 137k mile daily driver.

Have you thought about fitting caps to the allen bolts?

Obviously a case of personal taste, but I think it`s tidier with caps fitted.

Oracle said:
Have you thought about fitting caps to the allen bolts?

Obviously a case of personal taste, but I think it`s tidier with caps fitted.

I hadn’t, I like the fixings but caps could look nice too.
S

Finally got some time to look at fitting my Corvette brake ducts today. Although these are exceptionally close to an OEM fit, they do not fit right up on a road car.
There was a lot of fitting, warming, forming, tweeking in order to get these to clear certain parts of the chassis, align with the fogs and provide tyre clearance on lock.
i used a hot air gun and a steel tube to mold recesses and clearance curves in the tubes so they didn’t foul on anything. Plastic oem trim rivets we’re used to pin them to the crash beam. Trimmed the arch liners to fit those back in too. Eventually I got a fit that I was reasonably happy with and good tyre clearance on lock.
Now i just need to sort some finishers between the fog light bumper trims and duct tubes.

That sounds and looks like a very challenging install but the end result looks very O.E.M. and will I’m sure provide the directional cooling that you are after.

It will be interesting to know over time if you find benefit under extreme driving conditions.

Thanks.
I’m not going to lie, it was a good few hours of cocking about. The bumper went on and off about a dozen times to make sure they were sitting as good as they possibly could be.
I had to relocate the horns further up to provide clearance and alter the formings to stop the tyres catching on full lock. There really is very little room on a road car. If it were a face car I’d have just cut and drilled the body and altered parts to get them in, but I didn’t want that.
I may still run a direct hose from the outlets to back of the discs.

I keep toying with the idea of a more thermally efficient caliper design but I think the OEMs will work well enough if you can manage the heat effectively. 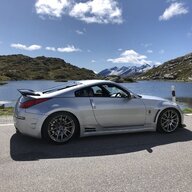